Somalia ratifies seven ILO Conventions, including on Tripartite Consultations (C144) and on Violence and Harassment (C190)

By joining the Global Deal partnership in November 2020, the Federal Government of Somalia has engaged to make efforts towards ratifying and respecting the ILO’s fundamental conventions as well as facilitating structures for social dialogue. Alongside the Somali Chamber of Commerce and Industry (SCCI) and the Federation of Somali Trade Unions (FESTU), already partners to the Global Deal, the Government has taken action to advance social dialogue by establishing the Somali National Tripartite Consultative Committee, a permanent platform of social dialogue on all employment and labour related issues in the country.

On 6 April 2021, the Government deposited the instruments of ratification of seven ILO Conventions, covering tripartite consultation, violence and harassment, safety and health at work, private employment agencies and migration. During the virtual ceremony to mark the event, Mr. Duran Ahmed Farah, Minister of Labour and Social Affairs, highlighted that the ratifications represent a major milestone that will lead to improved rights and wellbeing of the country’s workforce.

Somalia is the fifth country worldwide to ratify the new Violence and Harassment Convention (C190), which is the first international standard that provides a common framework to prevent, remedy and eliminate violence and harassment in the workplace, including that which is gender-based. Convention No. 190 requires governments to adopt, in consultation with employers’ and workers’ organisations, an inclusive, integrated and gender-responsive approach and to take action ranging from prevention and protection, enforcement and access to remedies to guidance and training.

In addition to the Violence and Harassment Convention (C190), the Somali Government has also ratified the following six international labour Conventions:

The implementation of these instruments will contribute to improve social dialogue, reinforce workers’ rights and further decent work in Somalia. To achieve this, the next step will be to put in place mechanisms in national law for the application and enforcement of these Conventions. 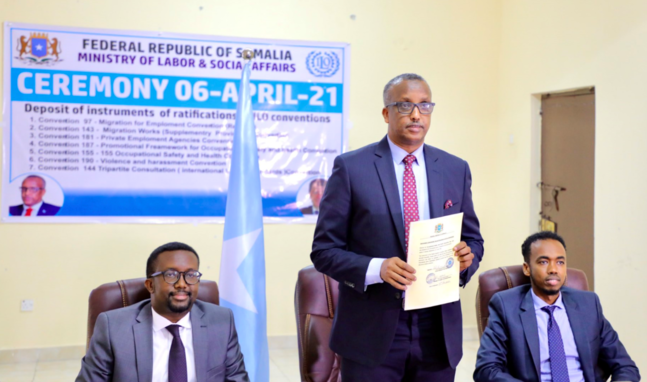